This year Our Chapter celebrates its 25th Anniversary !

The Philadelphia Chapter of the Kosciuszko Foundation kicked off its 25th anniversary celebration on October 27, 2019. We would like to express our thanks to those who joined us at the Museum of the American Revolution to commemorate this milestone. Special thanks go to the Chapter's founders who honored us with their presence and willingness to share chapter's history dating back to the initial meeting in 1994.

Many thanks also to our passionate and enthusiastic speakers. The lecture on Poland and the US Constitutions was captivating and highly educational. The Polish Constitution of May 3, 1791 and the American Constitution of 1787 are bound by many shared values and ideals. Both are examples of successful modern constitutions which implemented the ideals of Enlightenment, such as separation of power, checks and balances and effective judicial review while also providing for human and civil rights for their citizens. Both were grounded in local legal traditions and herein seems to lie the key to their success. While it is generally know that American Constitution was based on British parliamentary traditions, it is largely unknown that Poland had long standing liberal legal and political traditions, including extensive human rights protections for its citizen and full religious liberty far earlier than any other European country. Moreover, Poland had a developed parliamentary traditions, effective court system and judiciary and was politically innovative, among them, Poland introduced elective monarchy when the rest of Europe was ruled by absolute rulers. The latter, while innovative, ended up enabling Poland's enemies and resulted in the partitions of the country that lasted 123 years. The lecture dealt with these and other topics related to these two innovative constitutions. Below are snapshots of this enjoyable evening.

The 12th Polish Cultural Salon that benefits educational scholarship fund of the Philadelphia Chapter was hosted by Hanna and Mirek Wewiora in their beautiful home on Saturday, September 7th, 2019.

The lecture by Ryszard Druch, a well-known cartoonist, graphic artist, cabaret artist, teacher, and above all a promoter of Polish culture and art provided an interesting review of the history of Polish caricature and included the author's personal perspective and many of his own contributions.

Mr. Druch also drew live caricatures of our Chapter's President Sylwia Czajkowska and one of the guest volunteers. As usual, the Salon was a fun gathering with great conversations and a plentiful table! Another truly memorable evening attended by over forty members of our Chapter!

An amazing evening hosted by Hania and Mirek Wewiora and attended by over 60 members of our Chapter took place on Saturday February 23, 2019.

A fascinating presentation on Edith's life and career was given by Mr. Andrzej Jozef Dabrowski a writer, publicist, journalist and radio personality. Conversations, great food and Edith's music filled out the evening !

A spectacular evening of great company, music, dance, carolling and oplatek sharing. So happy to share this event with Ogniwo Polish School, friends from the Polish Heritage Society of Philadelphia, Polish People's University, the Jagiellonian Law Society, Druch Studio and many, many others.

Great start of the Holiday Season!

Our Christmas Dinner  Theatre that took place on December 9, 2017 at the Associated Polish Home in Philadelphia. The evening begun with the performance by the Toronto's  Salon of Poetry and Music called " Good Evening Monsieur Chopin" . Sharing oplatek, dinner and carolling followed. Our raffle prices were in high demand. All together an evening of fun!

This year the Pulaski Day Parade highlighted "The Year of Kosciuszko", an International Celebration Marking the Life and Accomplishments of a Hero of Both Poland and America. The parade also celebrated the history, culture and pride cherished by the Polish American community. During the 2017 Pulaski Day Parade, we also marked the 409th Anniversary of the First Polish Settlers in America.

Congratulations to  Teresa (Terri) Wojcik, Ph.D,  on being selected as the Grand Marshall for the 84th Philadelphia Pulaski Day Parade!
Terri has worked very hard as an advocate for Polish causes throughout her young life. She has served in leadership positions in many Polish-American organizations including the Philadelphia Chapter of the Kosciuszko Foundation, Teaching English in Poland summer camp program, the Associated Polish Home, the Polish Institute of Arts and Sciences of America, and the Polish-American Festival at the National Shrine of Our Lady of Czestochowa.

Kosciuszko Bicentennial Celebration & A FABULOUS reception at the Liberty hall

On Sep 23, 2017 professor Garry B. Nash presented a lecture entitled Kościuszko, Jefferson & History's Forgotten Man from Stockbridge at the Museum of American Revolution in Philadelphia. He provided a brilliant interpretation of a controversial story of Kościuszko's last will and Jefferson's betrayal. This remarkable historical account interweaves lives of three men linked by issues of liberty and race that fueled revolutions across two continents. The museum lecture hall was full as so many celebrated the bicentennial anniversary of the death of Polish-American hero.

The reception featured a delicious menu with Polish cuisine overtones and the famous Kosciuszko Bridge Cocktail provided by the Polish Cultural Institute NY. As a part of this celebration, three African-American students who participated in the Kościuszko essay competition were awarded Garry Nash's books and monetary awards. This event was organized by the Philadelphia Chapter of the Kościuszko Fundation in collaboration with the Museum of American Revolution and the National Park Service.

The program included Paul Krzywicki's presentation of fascinating stories of lives and contributions of Polish musicians to the Philadelphia Philharmonic and the Curtis School of Music. Paul who is currently on the faculty of the Curtis Institute was a member of Philadelphia Orchestra for thirty three years. He is the author of the chronicle of Polish virtuosos "From Paderewski to Penderecki -The Polish Musician in Philadelphia."

Paul's presentation was followed by a jazz concert by talented singer Gosia Julia Maj with an accompaniment by percussionist Arturo Stable. Another captivating Salon evening!!!

Kosciuszko National Memorial, at 301 Pine Street in Philadelphia preserves the home of Tadeusz Kościuszko. The life and work of the Polish patriot and hero of the American Revolution are commemorated here. 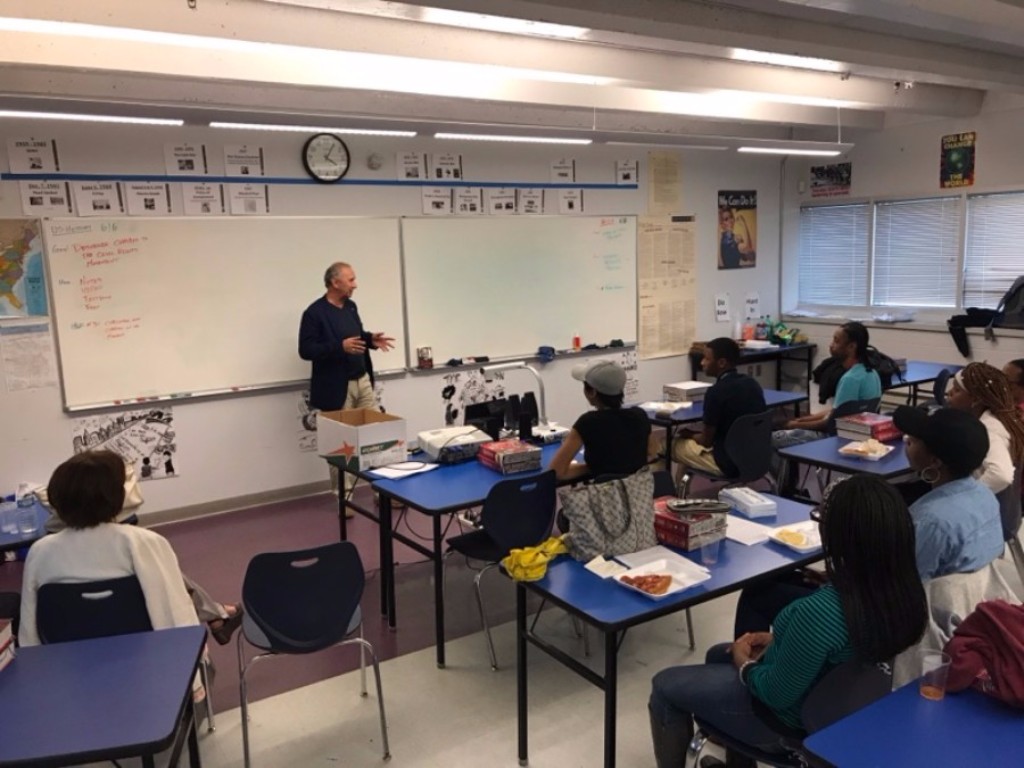 The Committee of  Cooperation with the        African American            Community met with  students at Mastery  Charter School at  Pickett Campus in  Philadelphia on June 6,   2017.
Bozena Korczak, Romuald    Roman, and Pawel Latos  met with a group of seven  students interested in participating in our essay competition about Tadeusz Kosciuszko. Prior to the meeting Ron Nichols, Internship Coordinator, informed us that students and teachers selected the topic: Why is Tadeusz Kosciuszko an inspirational leader to me?
The meeting started with a 20 minute presentation of Mr. Storożyński's movie Kosciuszko: A Man before his time.
This was followed by Bozena Korczak's presentation on the Kosciuszko Foundation's history and its cultural and educational mission. Bozena emphasised the issue of supporting educational endeavors of talented scientists and student exchange between the United States and Poland. Romuald Roman concentrated on Kosciuszko's idealism, his significant role at the battle of Saratoga, his abolitionist views, and his fight for freedom in the United States and Poland.

Pawel Latos concentrated on the essay competition and its criteria.  The essay is to have 500 to 1000 words and will be evaluated based on the independent, personal thoughts of the author and its literary value. The essays will be screened by teachers first and then presented to us. We will select the best essays in cooperation with the school. The best authors will be recognized and receive cash prizes following the lecture by Prof. Nash at the Museum of American Revolution on September 22, 2017. 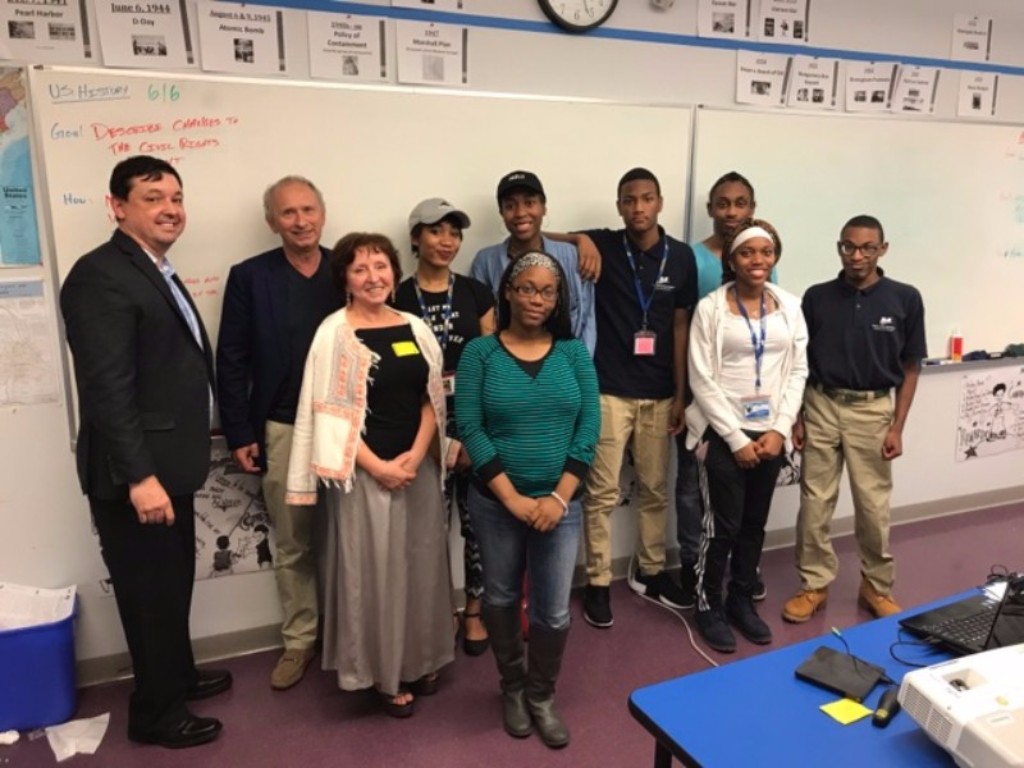 At the end of the meeting, we    answered several students'  questions. We focused on  encouraging
students to be independent, critical  and innovative in their essays. Also,  we recommended two books about  Kosciuszko: The Peasant Prince by  Alex Storozynski and Friends of  Liberty by Gary Nash.

Mr. Marek Skulimowski, the new president of Kościuszko Foundation, visited Philadelphia on January 6, 2017. Philadelphia Chapter Board Members met with him and discussed our various initiatives.  In particular, we discussed in some detail this year's main project focused on the celebration of the bicentennial of Tadeusz Kosciuszko's death. We also discussed the challenges of expanding and improving the presence of Polonia in Center City.

We wish Mr. Skulimowski great success in his tenure as President and an Executive Director of the Kosciuszko Foundation.  We are here in Philadelphia to help him to succeed.

The Polish Cultural Salons are proving to be extraordinarily popular. 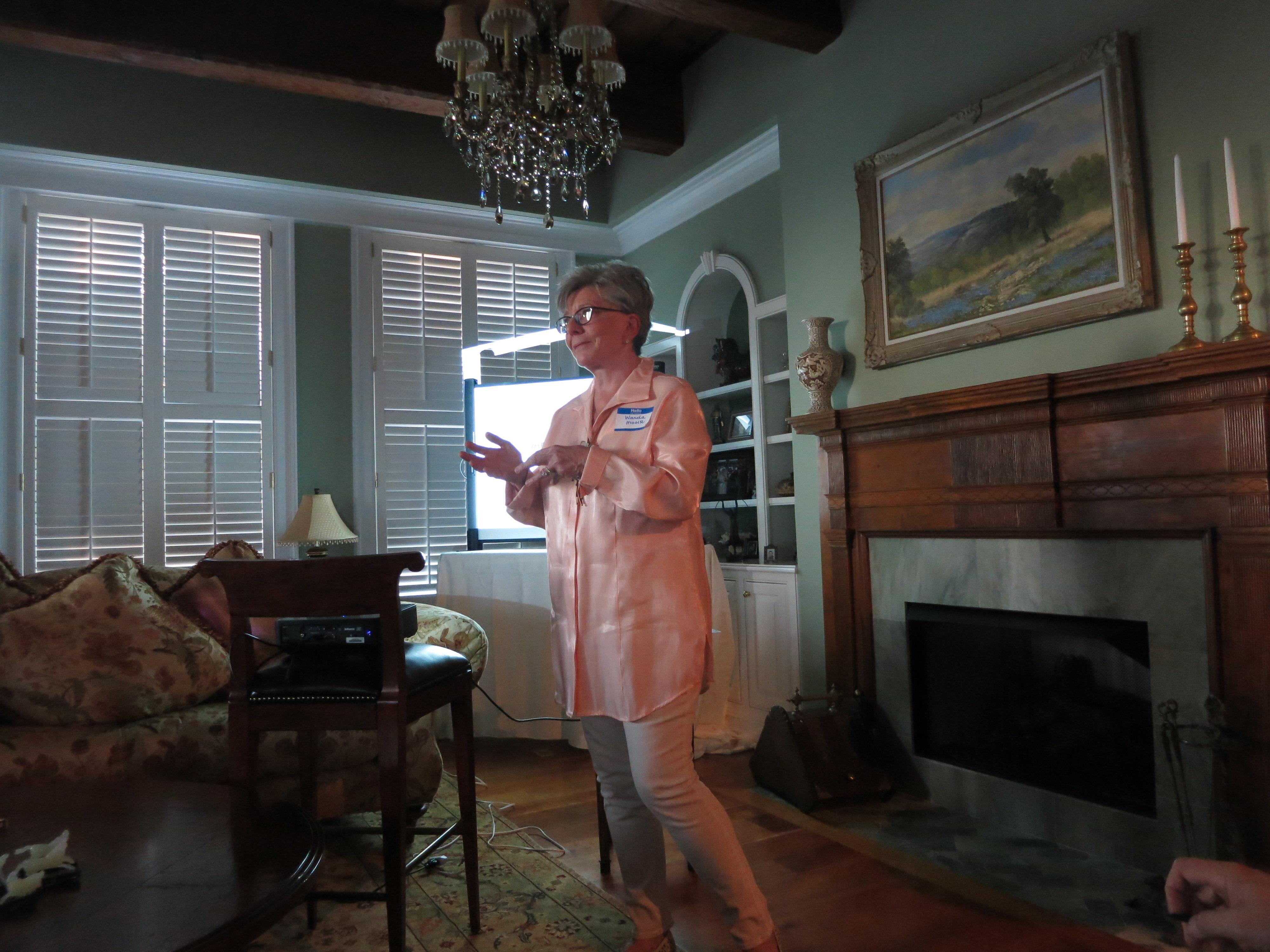 The fourth cultural salon was held on October 23 at the Society Hill Center City home of Wanda and Brian Mohr with 35 people in attendance. The program centered on a presentation about the Cichociemni, elite Polish special operatives trained in England and dropped behind enemy lines into German occupied Poland during World War II. Wanda's father was a Cichociemny and she presented his experiences within the larger context of the history of these Polish heroes. 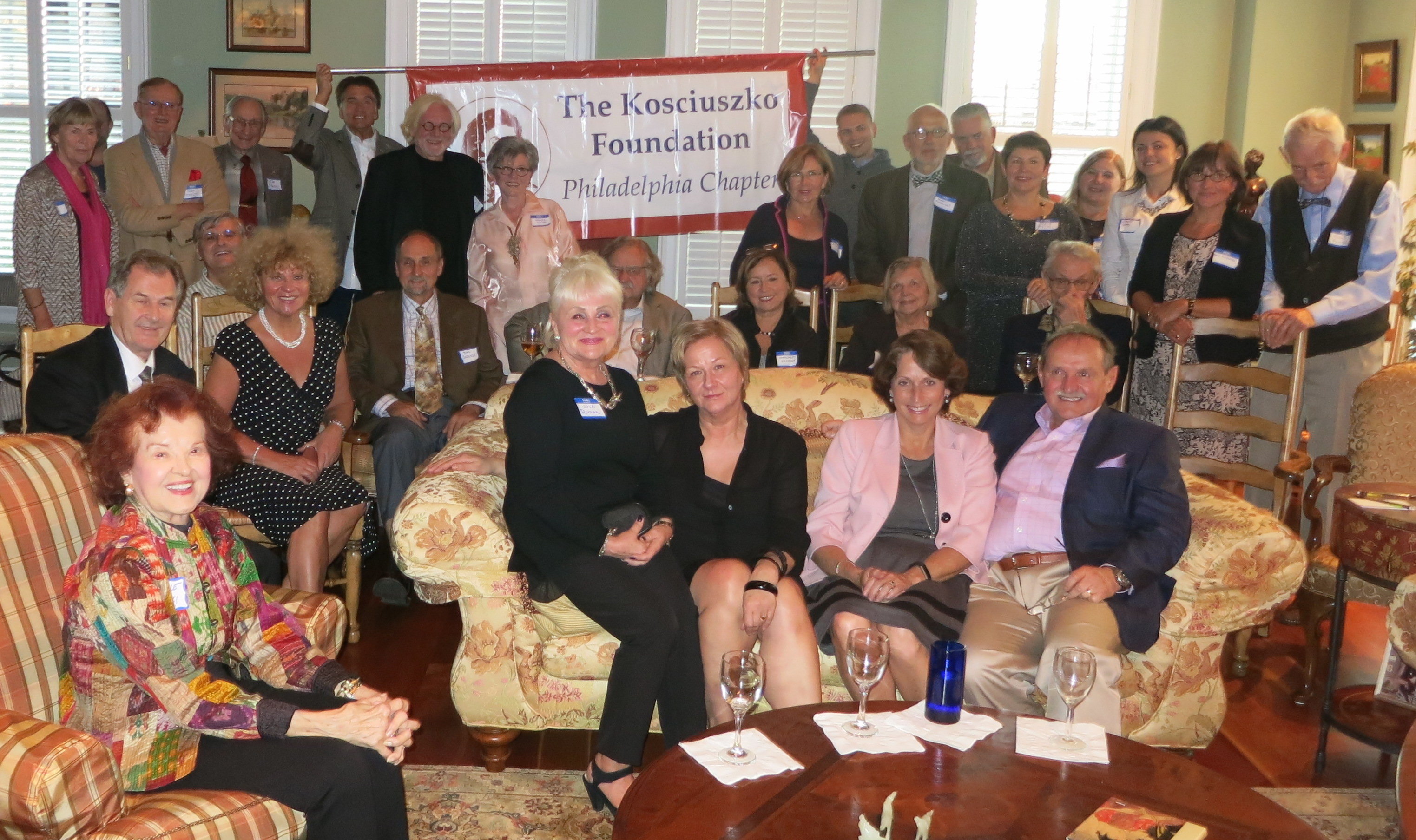 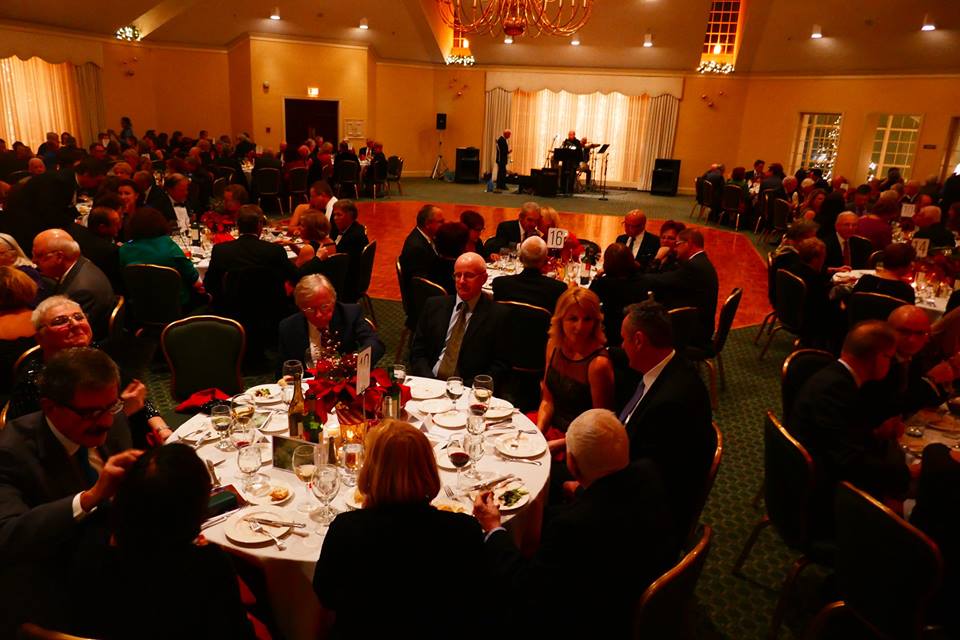 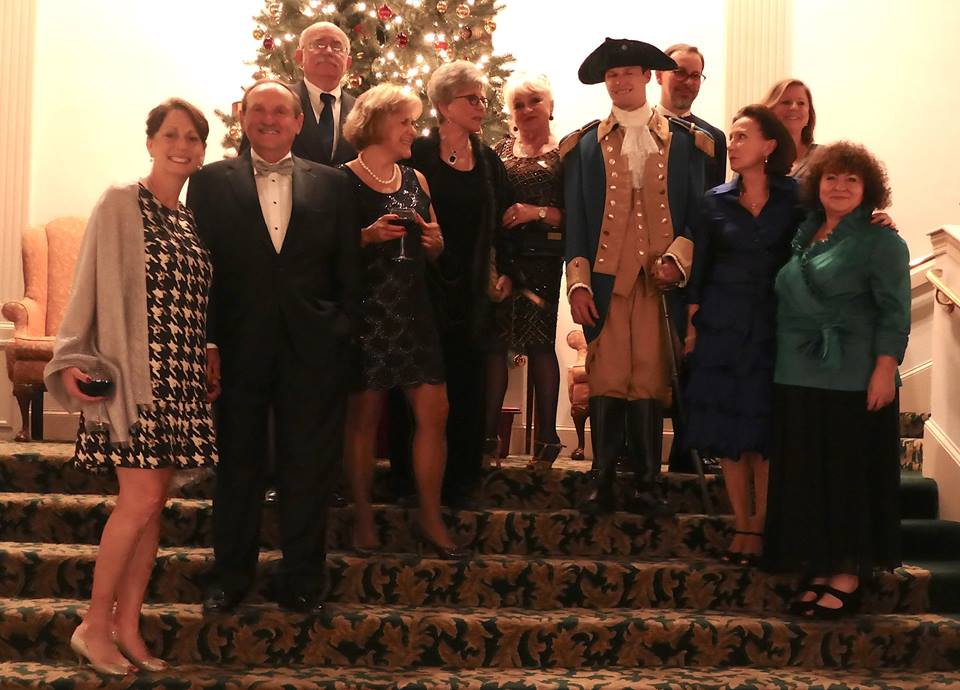 One hundred and eighty-six guests attended the first KF Philadelphia Chapter, Polish Heritage Society of Philadelphia and Jagiellonian Law Society joint Christmas Gala which was held on December 3, 2016 at the Whitemarsh Valley Country Club, Lafayette Hill, PA. The evening began with a cocktail hour, followed by a dinner, dancing and silent auction. Ela Sozanski led the guests in singing carols in both Polish and English.  Brian Matuszewski, who was dressed as Tadeusz
Kościuszko, provided an interesting historical touch to the festivities.

The documentary film by filmmakers Basia and Leonard Myszynski, "Bridging Urban America" documenting the achievements of civil engineer Ralph Modjeski was shown on July 10, 2016 at Drexel University in the Mandell Theatre at 3201 Chestnut Street. The film screening and reception was a huge success. The film will be available on DVD in November of this year.

The Philadelphia Chapter supported the Pennsylvania Ballet performance based on Czesław Miłosz poem, "O Zlozony," a lyrical hybrid of classical and modern dance.  This extraordinary ballet was first performed in Paris in 2004 to rave reviews. For the New York Times review click here:
The ballet took place June 9-12,2016 at the Merriam Theatre on Broad Street in Philadelphia. For more information about this performance click here.

In addition to the great company was Christmas Carols, good food and wonderful company.